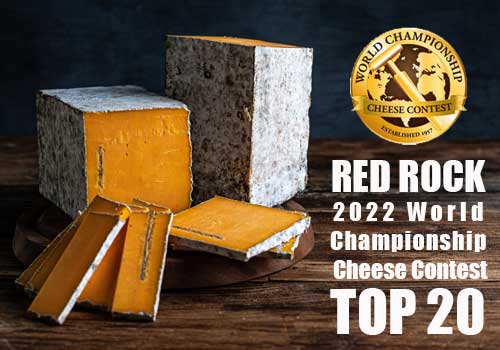 This has been an exciting time for cheese lovers, the World Championship Cheese Contest was held March 1-3 at the Monona Terrace in Madison, WI.  Although not open to the public this year, it invited 53 internationally renowned dairy processing experts from 16 nations to select its best of the best from 2978 entries in cheese, butter, yogurt and dry dairy ingredients. 141 classes showcase the world dairy industry.

Red Rock, an original recipe cheddar blue cheese created and crafted by Master Cheese Maker Chris Roelli, of Roelli Cheese Co. took Best in Class in the Open Class Cheeses with Blue Molding.  Red Rock then went head-to-head with the other Best in Class winners to be named to the Top 20 cheeses.  A virtual announcement was made by the Wisconsin Cheese Makers Association on Thursday March 3, naming the top 20 cheeses, second and first runner ups and the coveted Best in Show won for a third time by the Swiss with Gourmino Le Gruyere AOP.

Roelli was ecstatic to learn of his extraordinary showing while volunteering at the contest.  He contributes his success to the superb quality of the single source local milk he uses from the Peter Cernek Family Farms just 6 miles from his factory.  He also credits his entire team whose efforts contribute to the success of the entire business. “The Master Cheese Maker program has helped foster the technical skills required to make world class cheese”.  “To have a footprint amongst the best cheesemakers in the world is a true honor” said Roelli.

Red Rock is an American-style cheddar blue, double colored with annatto, spiked to create minimal veining and caved aged just long enough to develop its funky bloomy rind.  It has a very mild meaty texture but earthy flavors around its veins and rind.  It combines the best flavors of cheddar with tanginess of a mild blue.  Red Rock is sold nationwide in small quantities and can be found at full-service cheese counters, on restaurants cheese boards and as an ingredient that chef’s love.  It can be purchased at the Roelli Cheese Store and there are links to online vendors at roellicheese.com.