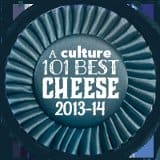 In the past two decades, Chris has led Roelli cheese to shift its focus from industrial cheddar production to small-scale, artisanal production of American originals. With the recent completion of a state-of-the-art aging cellar, Chris’s production has doubled, and his repertoire continues to expand.

Red Rock is a traditional American cheddar with a natural rind, cave aged from 2 to 6 months. It’s made using a proprietary blend of cultures created by Chris Roelli.

Colored with twice the amount of annatto found in a traditional Wisconsin cheddar and poked through the center to promote the growth of blue mold streaks, this cheese is has a striking, unforgettable appearance.

Flavor is creamy and complex, reminiscent of a cheddar but with a hint of blue at the finish.
Pairings:  Pair it with a Roija, a Zinfandel or a small-batch Bourbon.