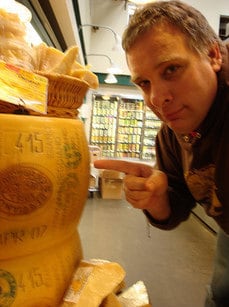 Putting a cheese platter together for a holiday bash? Promise you’re not planning to hit up Trader Joe’s for a shopping bag full of industrial specimens entombed in factory plastic. In case you’ve been distracted by life these past 12 months, turns out 2009 was an interesting year in cheese ― which is where Gordon Edgar comes in. Cheese buyer at Rainbow Grocery (1745 Folsom at 13th St.) since 1994, Edgar curates an exquisite selection of the mild and the pungent, the grate-worthy and the semisoft. His cheesy memoir,Cheesemonger: A Life On the Wedge, will be published in early 2010 by Chelsea Green. Behold Edgar’s picks for half a dozen of the most interesting cheeses you can drop on a platter this season. ―J. Birdsall, SFoodie Editor

2009 is almost over, so the Weekly asked me to do a little cheesemonger reflection upon this past year in cheese. If you love the cheese, a few new cheeses and dairy trends have surfaced that are worth checking out:

​1. The New Swiss: Because of changes in Swiss government dairy subsidies, a lot of milk that used to go to Emmenthal and Gruyère is now available for creative cheesemakers. My favorite among the New Swiss is Challerhocker, a cheese with all the amazing sweet, nutty, slightly pungent flavor of a well-aged Gruyère, but with a creamy, semisoft texture (and including those amazing aging crystals). Besides Challerhocker, a plethora of new Swiss cheeses are available in select Bay Area shops: Nidelchas, Scharfer Max, Brebis Rossinière, Selun, Försterkäse, Dallenwiller, and Heublumen, to name just a few.

2. Dunbarton Blue: Made by the Roelli Cheese Company in Shullsburg, Wis., this cheese is basically a beautifully aged farmhouse cheddar with blue veins running throughout. No blue out there compares to this, except for the accidental veining found at times in other traditionally made cheddars (like Neal’s YardMontgomery or Fiscalini Bandage Wrapped). Sharp and earthy, with a mild- to medium-strength taste of blue.